Everything Woke Turns To Shit Shirt

Back To Back Impeachment Shirt

Donald Trump Back To Back Impeachment Champ Shirt

Joe Biden Not My President Mug

Trump 2024 Because America Never Be Too Great Shirt

If you are a Donald Trump supporter or simply love his shocking and entertaining statements, get our Everything Woke Turns To Shit Shirt Donald Trump. This is one of the hottest designs in our collection these days. Let’s get to know what makes the shirt so special and outstanding?

Why choose Everything Woke Turns To Shit Shirt Donald Trump?

There are several reasons explaining why you should get this shirt. From the stunning design to the amazing quote on it, the shirt is ready to please any Trump supporter. 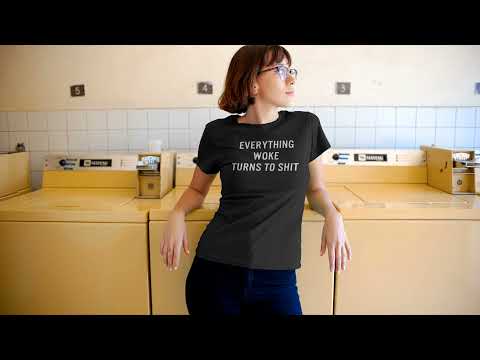 Do you wonder why we choose the quote “Everything woke turns to shit” for our shirt? The funny quote is actually a famous statement of Former President Donald Trump at a rally in Cullman, Alabama on Saturday.

During the Saturday rally, Trump wanted to know the large crowd’s thoughts about one of the most successful combat generals in U.S history — General Patton. This general was who helped lead the Allies to victory in the invasion of Sicily. Also, he was considered to be instrumental in the liberation of Germany from the Nazis during World War II.

At the rally, Trump asked the audience whether the General was “woke” or not: “Do you think that General Patton was woke?” The Former President shared his point of view: “I don’t think he was too woke. I think he was the exact opposite.” According to Trump, being woke is a “shortcut to losing everything we have”.

Exactly! The Former President slammed the generals for being “woke” that he said is a “shortcut to losing everything we have” and “turns to shit.”

Can you guess what Donald Trump was mentioning? Well, Let’s look at one of the most prominent events of America in general and the US military, in particular, these days. We mean the withdrawal of US troops from Afghanistan.

Trump made his famous statement at the rally in Cullman with a view to railing against his successor, President “Sleepy Joe” Biden over his U.S troop withdrawal from Afghanistan. According to Donald Trump, Biden’s policy is “the greatest foreign policy humiliation in the history of the United States of America”.

Biden aimed to get all US forces out of Afghanistan by August 31, hoping that the Kabul army will hold out for six months, enough time to evacuate. He claimed that the US military cannot and should not go to war and die in a war where Afghan forces are not willing to fight for themselves.

While insisting he would not change his point of view, Biden acknowledged the scenes he is seeing in Afghanistan are heartbreaking.

Yes! Trump truly focuses the majority of his rally speech taking aim at Biden over his botched chaotic evacuation of U.S. citizens and Afghan allies from Afghanistan, to the rising crime nationwide, inflation, as well as for failing to “stop the virus,” amid the increase of COVID cases which are the results of the highly contagious delta variant.

Trump insisted he had supposed that Biden would embolden America’s enemies. And Trump persuaded all that all Biden had done expressed that. Besides, Trump thought that the radical Democrat socialist agenda would set America on the road to economic ruin. Trump told all:” You look at what’s going on with inflation.”

Trump didn’t stop there, he continued saying that not only has what he predicted come 100% true, but everything was even worse than anyone could have imagined in their worst nightmare. Nobody thought this kind of thing could happen. Trump supposed that Biden has obliterated the country’s border, given up the energy independence of the United States, as well as caused soaring inflation. Biden, according to Trump, has failed totally on economics and policies.

The Former President frankly shared with all audiences that this is the biggest humiliation I’ve ever witnessed. The Former President claimed that Biden’s botched exit in Afghanistan is the most amazing display of gross incompetence by the leader of a country, perhaps at any time that anybody’s ever seen.

On the other hand, Donald Trump joins ‘Hannity’ for an exclusive interview talking about the Taliban’s takeover of Afghanistan as well as what he had done to deal with the Afghani government during his term.

Commenting on Biden’s decision to withdraw troops from Afghanistan, Donald Trump asserted, “Nobody has ever handled a withdrawal worse than Joe Biden. This is the greatest embarrassment, I believe, in the history of our country.”

“This is the greatest embarrassment, and beyond embarrassment,” Trump added. “This is something that it will affect our relationships for years to come and decades to come. I will say when China watches this, they are so happy and they are laughing at us.”

As we can see, Trump harshly expressed his indignation about Biden’s decision to withdraw troops from Afghanistan. According to Donald Trump, Biden’s policy is the greatest embarrassment in the history of our country.

With his statement, Former President Donald Trump would like to rail against his successor Biden over his U.S troop withdrawal from Afghanistan. With the quote “Everything woke turns to shit”, Trump means Biden is a loser after all he has done.

Putting that quote on the shirt, we believe that Funny Everything Woke Turns To Shit shirt Donald Trump will be the best shirt for any Trump supporter. In addition, if you are someone who hates Biden or doesn’t agree with his policy, you can also buy this shirt to show your political view.

We use direct-to-garment printing and eco-friendly ink sinks in our production. These are high-quality inks that are vivid, long-lasting, and resistant to cracking. You should note that in some cases, the printed image of the product might not be as good as the actual product due to some image quality problems. Please always believe in the quality of our products, because we always bring the best value to customers.

Before ordering, please look at the sizing information next to the t-shirt photographs. Please refer to the sizing guide in the photos if you are unsure about the size to order.

Not only do we guarantee quick shipping. Throughout the transportation procedure, we pay close attention to the product’s quality, avoiding any damage to the product at all costs. Customers can rest confident that our company’s delivery is of the highest quality!

Only logged in customers who have purchased this product may leave a review.