Every Border Implies The Violence Of Its Maintenance Shirt

If you are among people who are anti-border and anti-violent, this beautiful Every Border Implies The Violence Of Its Maintenance Shirt is exactly what you are looking for!

This is the perfect shirt for those who are anti-violent, anti-border! The quote printed on the shirt “Every Border Implies The Violence Of Its Maintenance”, will definitely help you shine! The special design is ready to make you outstanding in the crowd so don’t hesitate to pick it right away! 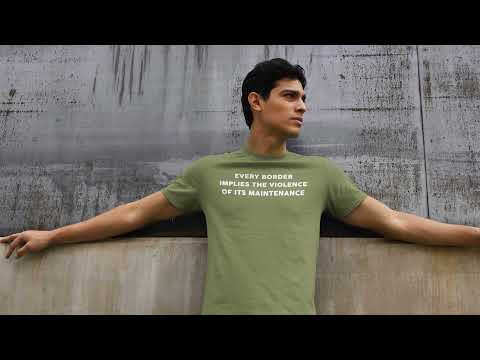 Every Border Implies The Violence Of Its Maintenance shirt meaning

Why do we print the message “Every Border Implies The Violence Of Its Maintenance” on this shirt? What is the meaning of the quote? Actually, we got the inspiration to design this shirt from a viral photo on Twitter on 29 September.

“Every border implies the violence of its maintenance” means all national borders are associated with violence. Border violence is considered what helps maintain the national border and ensures national security. The quote highlights the existence of border violence and its role in border defense. Wherever there is a border, there is violence.

The word “maintenance” in the quote can sometimes be understood as “peace of the country”. And to achieve this peace, it means that state violence has to be commonplace. Of course, many people will disagree with this viewpoint.

There is so much violence going on in the border area, affecting so many people. The border’s association with violence infuriates a lot of people. With the message “Every Border Implies The Violence Of Its Maintenance”, our shirt will be the perfect choice for those who are against violence and against borders.

A Twitter account named @AyeshaASiddiqi shared that a few months ago she had a chance to interview @HarshaWalia whose groundbreaking work speaks to the truth of this quote. It is said that the quote is inspired by Harsha Walia’s viewpoints on the New Pillars of Border Imperialism.

Harsha Walia is a Canadian activist and writer based in Vancouver, British Columbia. She is famous for being the author of two books about border politics.

She thinks the calls to abolish the border are also calls that are abolitionist in nature. And that requires us to dismantle state violence. For her, the kind of no-border politics is an abolitionist vision because it calls on people to dismantle borders as a site of violence that reproduces oppression and violence.

According to Harsha Walia, there are lots of progressive people who believe in the border even when they haven’t realized the immense amount of violence it upholds. It can be regarded as one of the deepest and enduring forms of racial and social segregation in our contemporary world.

The writer insists that the most urgent intervention is a call for no borders and to question the legitimacy of borders. But for her, it’s not just the border on the map. She would like to emphasize borders as a regime that is deeply embedded in imperialism and capitalism, and racial stratification on this planet.

As you might notice, the rising number of migrant children and families trying to cross the US border with Mexico is currently seen as one of the most serious political challenges for Joe Biden and his new administration.

That’s exactly what Donald Trump expects: he and other Republicans think that Americans’ concerns about a supposed “border crisis” will be what supports Republicans to win back political power.

But in Harsha Walia’s viewpoint, there is no “border crisis,” in the United States or anywhere else. She supposes that there are the “actual crises” that lead to mass migration – for example, war, capitalism, and the climate emergency – as well as other “imagined crises” at political borders, which are often used to justify further violence and border securitization.

Yes! Every Border Implies The Violence Of Its Maintenance! Maybe it’s not a “border crisis”. But there are always actual crises at political borders used to justify violence. That is why borders are often associated with violence. And many people oppose borders because they believe that borders are places where violence is allowed, whatever the reason.

Every Border Implies The Violence Of Its Maintenance. There is no doubt about it. And while many consider it necessary to establish borders and carry out border violence, there are many objections. Let’s have a look at some comments on Nick Cho’s tweet to understand more about those various viewpoints.

A person wonders: “So a state needs violence to maintain itself, which means every state is inherently violent? Or in another comment, they ask: “Why else would we make the tops of fences with the ability to kill and maim?”

Someone adds: “I dream of no more national borders. They’re very problematic for many reasons one of which is it leaves refugees with nowhere to go. I know many will decry such a ‘radical’ idea but I think hard national borders are a relatively recent invention.”

Yes, you can imagine Donald Trump’s draconian immigration policy and the construction of the US-Mexico border wall as a typical example. Trump’s draconian policies have forced tens of thousands of Central American migrants to wait in Mexico until their asylum applications are approved.

There is also an opinion that borders are a scar on the surface of the planet, on the face of the Earth, meaning that borders and border violence only make this world an ugly and worse place.

Another view is “People squat on land and claim they own it. Then they put up borders to protect “their” resources from outsiders. I wish I had an answer for this.” They create a border and use violence with others to keep that border.

Also, we read a comment showing that the modern mistake was to define different nation-states by their borders rather than by their major cities (i.e. the borders should be just left indeterminate and dynamic).

About the impact of the COVID-19 pandemic, there is another opinion stating that Covid, in the crisis of the pandemic has really become the perfect reason to hasten the vision of securitization of borders.

In addition, there are some opinions that support the existence of borders as well as violent measures to protect borders.

There is a view that there are plenty of situations in which people move freely in and out of each other’s property and nobody is upset about it. Doesn’t change the fact that there is a limit to your consent and outside that limit, force applies.

Another comment expresses that most states would rather have peace among their people. To ensure that, a balance needs to be struck between social outreach and force to keep the law. In essence, a peaceful society is one that keeps that peace through implied violence.

Those who support border and violence even emphasize that also every law, including taxes and welfare benefits implies violence. They suppose that people can’t get a liberal society without violence. According to them, no borders, no nations

I live in New Mexico and frequently tell my teenage son about our border with Mexico, “that’s a political border, not a moral one.”