There have been many meaningful and inspirational quotes about the LGBT community, helping to affirm that anyone deserves love and happiness and deserves to be true to their gender, and “Sounds Gay I’m In” is a hot slogan of the LGBT community. “Sounds Gay, I’m In” is meant to express support for members of the gay, lesbian, bisexual, and transgender community and LGBT rights.

In the past few decades, in Western countries with the formation of an LGBT+ culture, people belonging to the LGBT+ community have gradually been treated as normal people, even many people even participate in many activities. political and social activities and has made outstanding achievements. This increasingly strengthens people’s awareness of LGBT+ and comes to respect and fight against discrimination targeting this community.

During all this time, many celebrities, as well as members, have also actively voiced their support for the LGBT community, contributing to inspiring people and helping LGBT people to overcome society’s prejudices to be themselves. So if you’re gay, lesbian, bisexual, transgender, or an LGBT advocate, show your pride and support in some special way, such as this Sounds Gay I’m In Shirt LGBTQ+ Pride.

On the shirt you also see the symbol of LGBT – the Rainbow Flag. The rainbow flag (also known as the gay pride flag or LGBT pride flag) was designed by Gilbert Baker in 1978 for Gay Freedom Day in San Francisco.

He designed the flag as a symbol of “hope” and “independence”, and intended to replace the pink triangle symbol. The flag doesn’t actually depict a rainbow, but rather its colors in horizontal bands, with red at the top and purple at the bottom. The flag represents the diversity of gay and lesbian communities around the world.

The rainbow flag today has become a symbol and pride of the LGBT community. Since its debut in 1978, this rainbow flag has undergone many design changes. Currently, the rainbow flag consists of 6 color stripes including red, orange, yellow, green, blue and purple.

With the meaning of connecting without borders and without limits, the 6 colors of the LGBT flag symbolize the diversity of the community and at the same time express hope, and the LGBT community’s desire to express themselves around the world. Each color on the LGBT flag has its own meaning, namely:

It’s June, which means there will be plenty of LGBTQ+ pride parades this month. If you’re looking to make your pride parade special, consider coming up with some awesome pride slogans first. LGBT slogans are always the perfect way to describe what the LGBT community stands for and a great way to help spread a message of pride.

And that’s why we created this amazing t-shirt. The shirt with a rainbow image and the slogan: “Sounds Gay I’m In” is sure to make you stand out from the crowd.  Let the world see how proud you are to be gays, lesbians, bisexuals transgenders! Wear our shirt and make the statement “Sounds Gay I’m In”!

Whether you call it gay pride, LGBTQ pride, or you come from a place where it’s called something entirely different, what can get most people to celebrate Pride month is the idea of proud of who they are.

Pride Month is a great occasion to celebrate diversity, love and inclusion. It’s time to stand up, be bold and celebrate who we are and how far we’ve come. Now more than ever, we need to say: “Sounds Gay, I’m In”.

The LGBT movement has grown in popularity since the 80s, and same-sex couples are no longer considered a novelty. The LGBT community now has a lot of supporters, not only in the US but also around the world.

Remember, you can be creative and use a slogan that reflects your goals. However, you need to make sure that the tagline grabs attention and is easy for people to understand.

It’s time to stand up, speak up and claim the rainbow! 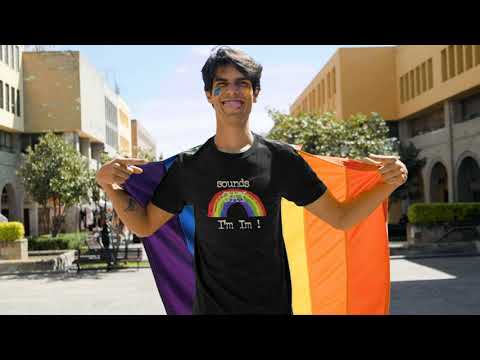 There are countless ways to show pride in being an LGBT person, and wearing a shirt with LGBT-specific quotes and images is one of the most popular and fun ways.  The cute shirt featuring Gay Pride Rainbow flag and the slogan ”Sounds Gay I’m In” will definitely make gays, lesbians, transgenders, bisexuals satisfied!

Sounds Gay I’m In Shirt is also a great gift for gay, lesbian or queer man, woman or teen who loves funny quotes and memes. A comfortable and cute shirt to wear during pride month and all year long. Show your pride with this funny Gay Pride Shirt. This soft ring-spun cotton tee runs true to size and is sure to be your new favorite.

Sounds Gay I’m In Shirt LGBTQ+ Pride is one of the best-selling items on our web now so don’t hesitate any longer, take it right away for people who are in the LGBT community!

Not sure where to buy this shirt, check it out on our site. High quality and a reasonable price with a variety of colors and sizes to choose from, our shirt is a perfect and timeless gift. Sure to be one of your favorites, our “Sounds Gay I’m In Shirt LGBTQ+ Prid” will catch everyone’s attention as you walk down the street.

We are a completely eco-friendly company. Every material we use is 100% cotton, direct to garment printing, cutting and heat pressing is used to create our items proudly in the USA. With this design, you can choose from a variety of styles in addition to t-shirts such as Long Sleeves Tee, Tank Top, Sweatshirt, Unisex V-neck, or Unisex Hoodie For Kids, Men, Women.

Also, we have many sizes from S to 5XL, so it’s suitable for everyone. Please see the size chart carefully when ordering. We also have shirts in different colors, choose your favorite color and get a great t-shirt.

So, what are you waiting for? Scroll to the top now and click Add to Cart to take your wonderful shirt today!

You May Love: LGBT I Promise To Teach Love Shirt